I have just bought a new camera and whilst looking through an old SD card I found this shot of my daughter, taken when I think she was about 14 months old. She had emptied out an entire shelf of my kitchen cupboard, carried it all, bit by bit, into the hallway and then she started to experiment. First she emptied out all of the stock cubes and built a tower with them before unwrapping them and crumbling a few and mixing with a whole pot of dried herbs. Then she emptied the whole pot of salt out on the floor and began to make patterns with the (expensive Denby!) cup, mug and cinnamon jar in the spilt salt. Slightly out of shot is the empty packet of custard powder emptied before the salt and the open packet of pasta that had been crushed/thrown around and discarded. I don’t think she’d started on the vinegar by this point.

Look at how pleased she looks with herself, to my mind she’s thinking “hey I did good mum – look at this pattern I made and I did it all by myself!”

She is child number 4. If this had been child 1, 2 or even 3 the child in question wouldn’t have been smiling and I most certainly wouldn’t have been taking a photo congratulating her on her masterpiece. I would have been cursing, shouting and quite possibly crying and asking why she had done this to me? why did she have to be so naughty? why did she do these things when I was most tired or busy?

…..but by number 4 I had learnt to stop fighting with my toddlers, by no. 4 I had learned to understand them and learnt how wrong I had been with my others. For my daughter wasn’t naughty – she was like any other perfectly normal toddler – inquisitive, eager to learn, enthralled with the world – there was no malice, no selfishness, no lack of empathy, no plotting against me, no bad manners and no feralness – all things I had thought about my previous three for far lesser acts of toddler experimentation!

What did I say to her after taking this photo? “look at the circle shape you made with the salt, it’s nearly time for dinner now – do you want to help me tidy this away and put it back where it should be?”. Why would I tell her off? if anybody did anything wrong here it was me, for underestimating her dexterity at scaling kitchen cupboards!

Further searching through my SD card revealed 3 more pictures of my daughter that wouldn’t have appeared in my albums of children 1, 2 or 3, like the one where she learnt about the sticky consistency of suncream and how it felt cold and wet (and I guess good judging by the amount she put on) when emptied on her skin and turned anything else she emptied it onto white: 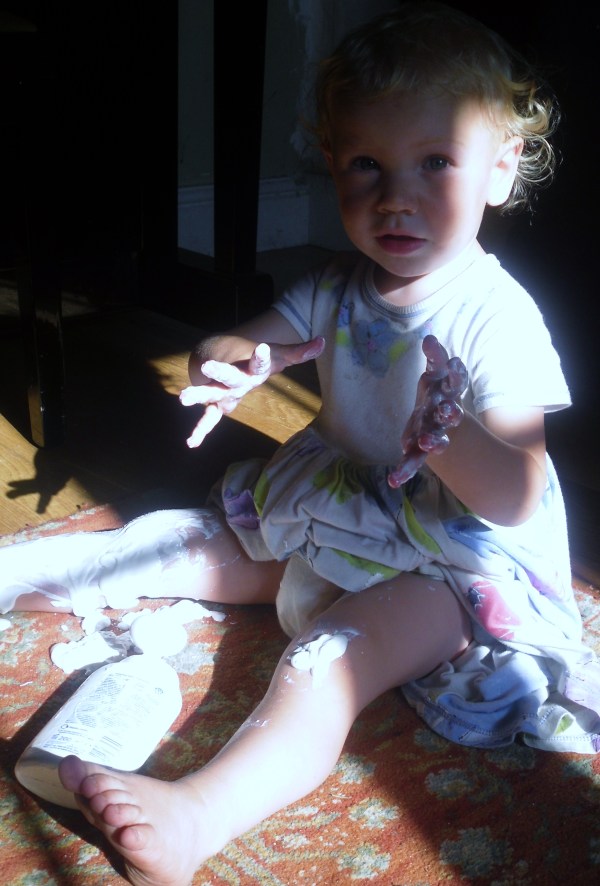 Or the time she found my very expensive Estee Lauder lipstick and decided to copy mummy and put on her own make up (on the whole of her face, hands, clothes, wall and mirror): 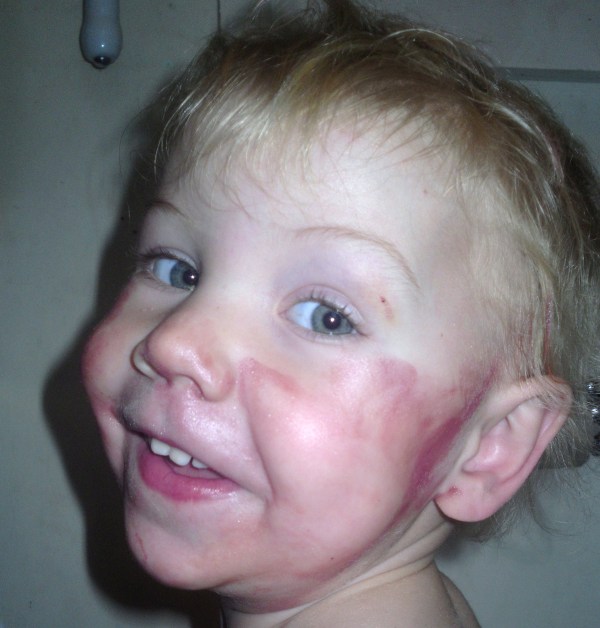 and my favourite – the summer she discovered how good it felt to pick her nose at the age of  15mths – oh what a love affair she had with her nose that summer – almost every picture of her we took on our holiday that year featured her in deep though, a finger searching every tiny mm of the inside of her nostrils.

What would you tell your toddler if you caught them in any of the shots above? how many times had I reprimanded her brothers for being NORMAL, for being little scientists, for having a healthy appetite for the exploration of their world.

I remember my lightbulb moment well, it was about 5yrs ago, I was walking my then 2yr old son to preschool. I was tired, I was busy, we were late. My son was walking at the speed of a snail and an elderly one at that. The half a mile journey took us around an hour, why? because he stopped to look at *EVERYTHING* we passed – leaves, rubbish, birds, worms, drain covers, broken bits of pavement – it was all fascinating to him. I started off in my impatient adult tone “come on darling, we haven’t got all day, hurry up” and after a while I got it, I hadn’t noticed the fruit on that bush before – who knew we had a wild damson tree close to our house? and that worm, how fascinating it was when it looped and curled around itself, the dew on the leaves sparkling like little gemstones….and I realised how much I was missing as an adult and I realised how fascinating our world really was and how mean of me it was to pull my little boy passed everything he wanted to see/touch/smell/hear telling him to “hurry up”. I realised how utterly frustrating I must have been making life for him. I realised something had to change….

So next time you tell your toddler “stop”,  ”no” or “hurry up” – take a little time and ask yourself why?