“How Much Sleep Should My Baby Get?”

An often asked, but almost impossible question to answer. I’m frequently questioned by parents who worry that their baby isn’t getting enough sleep. 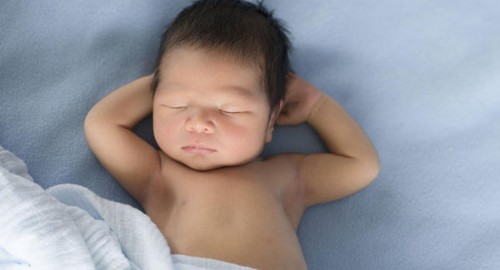 The simplest response would be “however much they need”, for sleep needs differ for each individual baby.

Any recommendations given are simply that, recommendations and any trustworthy sources provide a rough guide rather than a fixed figure of hours or time. Most recommendations for amount of baby sleep required, including suggested bedtimes and length and amount of naps, are not evidence based. Most stem from personal opinion with some being more educated than others.

Recent guidelines by the National Sleep Foundation provide a broad range in terms of sleep recommended at each age. During the first three months they indicate that anywhere between eleven and nineteen hours of total sleep per day *that includes naps and night sleep) may be acceptable. Between three and eleven months these figures change to a range between ten to eighteen hours in a twenty-four period (ie naps and night sleep combined). At twelve months the range of acceptability falls to between nine and sixteen hours total sleep in a twenty four hour period. What is not made explicitly clear is that these figures incorporate both night-time and daytime sleep combined. A baby who sleeps for eleven hours per night at the age of three months may only take two very short naps, perhaps each totalling thirty minutes and they would still fall within the range of acceptability in terms of total sleep per twenty four hour period. Similarly a six month old taking two naps of one and a half hours each may only sleep at night for a total of seven hours and will still fall within the realms of normality.

Recent research has recently questioned the importance of paediatric sleep guidelines. Researchers from The Murdoch Children’s Research Institute in Australia studied the sleep patterns of four thousand children and believe that associations between mental and physical health and well-being and sleep are overrated. The study found inconsistency between the amount of sleep a child received and their well-being levels and those of their parents, concluding that guidelines for specific amounts of sleep at each may not be necessary or useful.

While researching  my ‘Why Your Baby’s Sleep Matters’ book I asked over two hundred parents the question “before you had children, at what age did you think babies began to sleep through the night”. Their responses were as follows:

These responses fit very much with the commonly held expectation in society that most babies should sleep through the night by six months of age. Research findings however paint a very different picture. At the age of three months research has found that almost forty seven percent of babies wake three to four times at night. At six months of age research has shown that eighty four percent of babies are still waking at night at least once. At twelve months of age research has found that fifty percent of babies still need parental help to get back to sleep when they wake in the night. These percentages are likely to be underestimated in most cases too, as the large majority of research into infant sleep patterns relies on parent reporting of night waking. Knowing that all babies wake at least once per hour it is likely that what the parents are actually reporting is when their babies were crying for their attention during the night.

Why You SHOULDN’T Track Your Baby’s Sleep

Research has found however that diary keeping and parentally reported night waking is an inaccurate measure for recording infant night waking. Using actigraphy, a sensor worn by the baby which monitors movement, to measure night waking proves that parents under-report the amount of times that their baby woke in the previous night. In other words even if parents believe that their babies sleep through the night; they actually don’t, what they are really saying is “I do not need to go to my baby in the night when they wake.”

Once again the question that needs to be asked is “are baby sleep problems actually adult problems?”. If evidence based expectations of baby sleep were universally adopted it would be easy to see that what is expected of baby sleep in our society today is unrealistic. If expectations are adjusted then it becomes clearly apparent that what many feel are baby ‘sleep problems’ are really, just babies sleeping normally!