The side of my fridge is cluttered with merit certificates, head teacher awards, attendance certificates and little cards full of smiley faces. Every Friday a newsletter is delivered to me by a hand freshly decorated in lurid nail polish hastily applied during ‘Golden Time’. At least 50% of the newsletter is populated with behavioural reward results of some kind – ‘writer of the week’, ‘tidiest cloakroom’, ‘certificates of merit’ and ‘100% attendance awards’ and I can’t help but wonder where did we go so wrong? 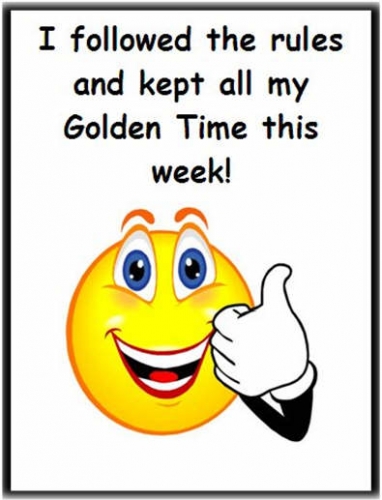 When did our education system become so obsessed with bribing children with rewarding carrots?

Are the powers that be really so all consumed by Gove’s visions of educational factories churning out behaviourally controlled drones? Are they really that blinded by his Matrix like plans that they stop viewing children as thinking, feeling individuals and instead see them as akin to laboratory animals in a 1950’s Skinner’esque conditioning experiment? This isn’t progress.

These strategies have major flaws. Their efficacy is arguable, particularly when holding a long-term view (though of course politicians rarely think long-term – why bother? They will be out of office and can blame the lack of results and complications on the new party in office, in a never-ending cyclical cycle). Not only is the efficacy questionable, but what is more concerning, is what we are doing to our children with this new rewards obsessed system. What are we doing to their motivation, ambition, confidence and drive? and how might this impact (negatively) on their future learning?

I am more than disillusioned with the current education system. If there was a way, I would home-ed my kids in a heartbeat. I am genuinely worried about the future of our children. Many parents agree, they instinctively feel that this constant bribing of our children with meaningless pieces of paper, badges, 10 minutes of ‘golden time’ and special awards is wrong. They would be right.

It goes beyond instinct though, There is a significant amount of scientific research that supports the notion that these behavioural techniques not only do not work in the long-term – but they may cause serious implications in our child’s future learning and willingness to engage with their own education.

Take for instance the ever-growing current trend of ‘rewarding the good’ – aka: bribery or ‘carrot dangling’. Does this really invoke long-term change? Can it motivate students to behave better, work harder, concentrate more and skip school less? Scientists would disagree.

The issue of intrinsic (internal) versus extrinsic (external) motivation is not a new one in the field of Psychology. What we really want our children to have is a strong internal drive to do well and learn more. That means this drive needs to come from within, in short they need to WANT to learn. How does this come about? Well – usually from an environment conducive to learning, age appropriate (largely focused on play and learning through the senses, particularly for younger children), full of objects, tools and people who inspire a child’s natural curiosity and natural scientist tendencies – an environment such as a forest school or an outdoor classroom perhaps with a teacher who is inspired by the child’s natural inquisitiveness and who fosters and nurtures it as delicately they would a seedling.

Add in to the mix parents who help the child to foster a sense of pride in themselves and a desire to keep trying and improving their skills. Simply put for the most successful education we need a child who wants to learn for no other reason than they want to learn! Because it is inspiring, because it is interesting, because it is FUN! Now how does that fit in with hundreds of stickers, crumpled pieces of paper with smiley faces, SATs and OFSTED inspection driven attendance scores? 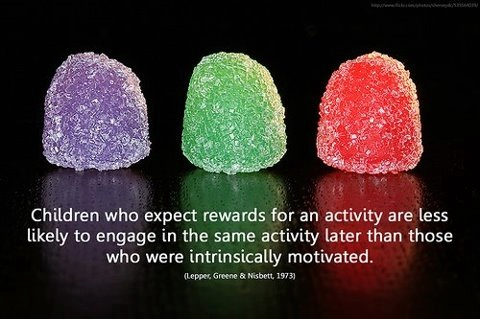 The simple answer is – it doesn’t. These meaningless proverbial carrots don’t inspire anything, aside from a short-term behavioural change which then gives way to less desirable behaviour than existed originally. You see it’s not just a case of ‘take away the reward and the behaviour stops’, it runs deeper than that – take away the reward and the behaviour is often WORSE than it was before you gave the reward. This is what happens when you foster extrinsic (external) motivation in children – “if you do this, then I’ll do/you’ll get xyz”. Scientists  have illustrated this correlation many times.

If the rewards don’t work, then what about the punishments? Really rewards and punishments are two sides of the same coin. What of the children who don’t have a ‘green badge’ for their attendance? Or those who are on the red traffic light, sad face or ’15 minutes lost’  of golden time? Will this punishment and singling out (for that is what it is, however ‘cutesy’ it is packaged on the wall chart) make the child more motivated to ‘be better’ next time? Again, it’s a big fat NO. Of course not!

If you were punished by your boss for “not being good enough”, singled out from your workmates, or missed a social ‘do’, would you vow to ‘be a better worker’ next time? Or would you sulk, question your worth and feel a dis-connect with your boss? This is so blindingly, simply obvious I am stunned that almost every school in the country treat OUR children (for that is what they are – not the school’s, not Gove’s – OURS!!) in a way that they themselves would never want to be treated.

What about the cause of the behaviour? Why is that never investigated? (I know the answer of course – no time, no resources) what about the child from the family on the breadline who is malnourished and exhausted, who misses school because of ill-health (no ‘100% attendance’ certificate for him!), or the girl from a family who is treated poorly, whose parents don’t care about her education, or her really for that matter, the girl who has to put up with daily insults and ill-treatment from those who should love her the most. What chance does she have? When she makes it into school 15 minutes late in unwashed clothing, on an empty stomach and it all becomes too much – her pain externalised into a tirade of verbal abuse at a teacher or fellow student. Straight down to the sad/angry face, red light, ’15 minutes lost’ she goes…..how in the world does this system motivate her? (and in most cases she is the one who needs the most motivation, for her behaviour impacts on the whole class).

What of the children who try hard every day but are not naturally gifted, those who never achieve high grades or win awards, but those who often try harder than those who do (the ones who are naturally gifted – or even worse, those who never try and are then rewarded for the tiniest bit of effort that they display once in a blue moon), when do they get their award? When do we recognise the constant effort they put in each day, despite never achieving set goals?

What of the child who is too scared to ask to stay home because he knows he will lose his attendance score and the special treat offered, even worse when the special treat is offered to his class – for he would be letting them down if he was ill. How does it help his education when he goes to school feeling ill?

Is it just me that sees this? Are there other parents out there as dismayed as I am? Who roll their eyes at each newsletter ‘rewards and achievements’ section? Who is more interested in how their child feels about their own achievements – whether they were awarded for them or not?

The key to our child’s success does not lie in the domain of certificates, awards, badges and ‘special time’, the key is inside of them, just waiting to be unlocked.

Perhaps if the echelons of educational authorities spent more time on creating a learning environment that met our child’s needs and less money on certificate paper, badges, OFSTED inspectors and behavioural training courses the world would be a very different place – filled with a genuine love for learning and with it a significantly higher level of academic attainment.