Many parents despair of their child’s inability to play alone for any length of time, or the speed at which they get bored with toys. The biggest problem with most toys today is that their play appeal is limited. A shape sorter is just a shape sorter, put the shapes into the holes and the toy no longer offers interest. An entertainment centre loses appeal after the buttons have been pushed, the beads moved along and the xylophone chimed. Most toys have a specific design and a specific purpose. When the child bores of the set purpose, the toy no longer holds appeal for them. Once the function of the toy has been exhausted they cannot be used in other ways, or allow the child to use their imagination. 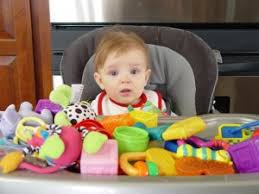 As children grow, the over provision of toys can stifle their imaginations. The overwhelming choice of playthings offered to most children today is perhaps one of the worst curses of modern childhood. I often hear parents mutter “you should be grateful, you have so many toys, in my day I didn’t even have half the amount you had”. The parents however are the lucky ones. Although it can be hard to understand why for many. Their childhood was likely filled with the amazing games of make believe that their own children lack.

Research, conducted by German researchers, found that removing toys from children results in them becoming not only more creative but more social too. In their experiment ‘Der Spielzeugfreie Kindergarten’ (“The Nursery Without Toys”), all toys were removed from children for a period of three months, the only items left were chairs and blankets. Initially they found that the children were bored, however they quickly re-adjusted and were soon building dens and enjoying the new set-up. By the end of the experimental period not only were the children playing imaginatively and creatively, but they were also more confident and social with each other with better interpersonal relationships and less friction and fighting between children. This led the researchers to claim that children can be “suffocated” by the presence of toys and also find it harder to concentrate when surrounded by toys.

While the idea of being a completely ‘toy free’ home may fill you with horror, there are some points from Strick and Shubert’s research that can be implemented with ease. Firstly is the obvious idea of thinning out the toy supply. Removing those items that are barely or rarely played with. Next is the idea of rotating toys. At the end of the experiment, toys were reintroduced to the nursery and the children were happy to see them return. The saying “absence makes the heart grow fonder” applies to toys too, rotating your child’s toy supply and putting some away in a cupboard for a month or two, so they remain fresh is a great idea. Lastly, never underestimate the play value in everyday objects, in this case it was simple chairs and blankets, but there are many other options too. I have listed some below:

Cardboard boxes, so many possibilities, anything from spaceships to houses.

Old handbags and purses, great to fill with treasures.

Water, freeze toys in ice, ‘paint’ with it on pavements, make boats to float.

Den building, inside with blankets and sheets, outside with sticks and branches

Bubble wrap, put it on the floor and jump and roll on it.

Plastic cups are great for stacking, pouring and scooping.

Finally, if you want to buy toys, look for some that are ‘open-ended’, that is – toys that don’t have a limited play value. See a list of my favourite toys, by age HERE.