Skip to content
I’m often contacted by parents who are worried that their children (usually toddlers) wake seemingly inconsolable after sleep, usually naps. They describe children who won’t settle (even for their usual fail-safes), can’t be reasoned with and seem in great discomfort. This crying lasts anything from a couple of minutes, to ten or twenty minutes, or more. This pattern is characteristic of a condition known as Confusional Arousal disorder. In adults, this parasomnia (a disorder that commonly affects falling asleep, waking up, or the period during sleep) usually manifests as slurred or slow speech, forgetfulness and generalised confusion (or what some may term as ‘sleep drunk’) and affects around 2.9% of people. In young children however the incidence is much higher at 17.3%, manifesting almost always as intense crying, although sometimes it can be continued subdued sobbing or whining. Confusional Arousal is more common if the individual is woken from sleep (ie parents wake the child from a nap), rather than the sleep cycle naturally concluding, however this is not always the case. The best way to view them is like an electrical blip in the brain, where the individual is jolted out of sleep too quickly and therefore becomes severely disorientated, with their body and mind taking a while to catch on to the fact they are now awake.

Although these episodes can be incredibly scary (and hard to handle as parents), the good news is they are not harmful to the child and are usually outgrown naturally by around the age of five years. As with other parasomnias (such as sleep walking or night terrors), there is often a genetic link and children who are affected will often have a parent who used to experience the same (or another parasomnia) as a child.

What can you do to help a child who suffers from Confusional Arousal? Ultimately this is a case of waiting for the child to outgrow the disorder (and keeping them as comfortable and safe as possible during an episode), until then, the following may be helpful:

Ultimately though, be ready to reassure them and offer as much physical contact as the child wants, to help them to calm down when they wake properly.
This is an extract from my NEWLY UPDATED Gentle Sleep Book – out now! If you would like to understand and learn how to improve your baby, toddler, or pre-schooler’s sleep WITHOUT cry-based conventional sleep training, this is the book for you! 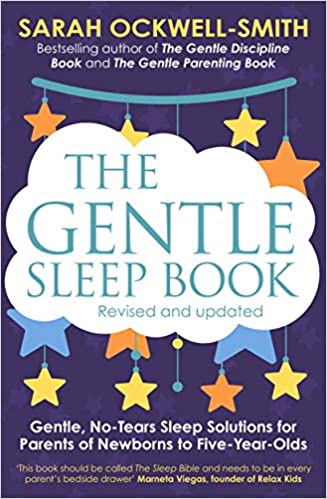