The Epidemic of Baby Sleep Training

Posted on January 17, 2016 by SarahOckwell-Smith

Our society is in the throes of an ever increasing and worrying epidemic, that of infant sleep training. For six thousand years humans have parented in a manner similar to that of other mammals who nurture their young. Babies would be held both day and night, they would be placed at the breast whenever they needed and as a result, although new parents were undoubtedly tired, there was no need for experts or products to solve baby sleep problems. Quite simply baby sleep problems didn’t exist. Adults understood normal baby sleep and they understood what babies needed to sleep in a more restful way. They also understood that disrupted sleep was temporary and adjusted their lives accordingly.

The dawn of industrialisation two hundred years ago changed everything. The pursuit of wealth and material belongings relegated parenting to a second class occupation. A new role appeared, that of the male parenting expert, such as Truby King and John Watson. Parents were advised to put their babies on strict feeding and sleeping schedules and love was seen as a weakness. Children were not to be ‘mollycoddled’ or shown excessive affection. Parenting styles come in and out of vogue with regularity. Interestingly they always seem to reflect the state and views of society at the time. In the case of the industrialised society these views were predominantly misogynistic and focussed on increasing wealth and productivity. You could argue that this is the prevalent view still today. In a society focussed on creating money and workers, love and emotion gets in the way. Mothers today are encouraged back into the workforce prematurely, at least when compared to the needs of their babies. More mothers in work however means a better economy and more money for the country. Is it any wonder that governments have no interest in supporting mothers to stay at home for the first three years of their child’s life? Our country’s economy benefits from baby sleep training in many way. Less tired mothers (and fathers) make better workers. Sleep consultancies create jobs and taxes, as do manufacturers of products intended to be used as mother substitutes to try to pacify babies who really need to be ‘in arms’. The same is true of the formula industry. More products mean more profit and more money for the governmental coffers. Why would they ever want to adopt a more nurturing and natural view on childcare?

….and then there are the parents. Split in two and not winning at anything. Struggling with their jobs and so little sleep, struggling to pay the bills and worrying about taking care o f their homes and relatives. On the other hand there are instincts. The instinct to protect this delicate newly created life. The pull on the heart when the baby cries, the feel of the baby relaxing when they are held close. The feeling that the advice given by a health professional is somehow wrong, but questioning what a naive first time parent knows compared to years of experience and medical degrees. Over the last two hundred years we have gained so much, electricity, fast transportation, instant communication and a longer life expectancy. What we have lost is far, far more though. We are starting to lose our humanity in the quest for ‘more’.  Industry and jobs have forced families apart. Families who throughout history have helped to share the burden of new parenthood. Motherhood is increasingly undervalued. How many stay at home mothers do you know who introduce themselves as “just a mother”? Some people argue that gentle or attachment parenting, which frowns on conventional sleep training, is anti-feminist. I would argue completely the opposite, the sleep training epidemic and misogynistic industrial society of today is the true enemy of feminism.

The biggest losers of all though are the babies. The sweet innocent babies who have not changed since the babies of six thousand years ago. Their needs are unchanged and simple. They need love, nurturance and the constant reassurance of parental presence through day and night while their brains develop enough to allow them to become truly independent. They need food when they are hungry. Now though they are treated as problematic. The same sleep patterns that have been handled without trouble or ‘expert advice’ for thousands of years have now become a source of big business. It is in the benefit of industry for babies to be seen as having sleep problems. It creates money and it also stops parents asking what in the heck we have done that we now consider normal human biology problematic and to instead accept, without thought, the brainwashing that we *need* to constantly work to earn money to buy more stuff.

Babies don’t have sleep problems. Babies have never slept through the night and they never will, at most the modern day sleep training epidemic will cause them to lay awake alone at night and not signal their distress to their caregivers. The problem has nothing to do with the way babies sleep. The problem belongs to us, as adults. The problem belongs to industrialisation and the questionable ethics of those who live off of the exhaustion and anxiety it has created. Those who make millions supposedly trying to fix the problem that the very same industry today has created. Many parents will say “but I HAD to sleep train my baby, I just couldn’t function. I have a job to do and a house to keep”. The truth is though that nobody ever needs to sleep train their baby, at least not in a manner that makes the baby suffer for being a baby. The real problem is that we are now so accustomed to our industrialised lives that we are unwilling to make the sacrifices that parents have made for their babies for thousands of year. There is always something that can be done that doesn’t mean enforcing unnatural sleeping patterns on our babies (see HERE for more). The question is, are we unselfish and un-blinkered enough to break free of the modern sleep training epidemic? 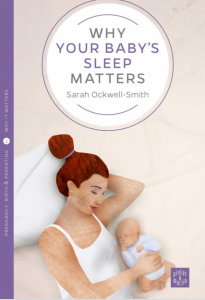 If you liked this article you can learn more about the history and cultural aspect of baby sleep in my upcoming book ‘Why Your Baby’s Sleep Matter’s’. I hope it may go some way to reclaiming instincts and the value of parenting!

Plus, check out the ‘Why Your Baby’s Sleep Matters’ Facebook page, for more science, history and anthropology of infant sleep.